Cosmic DAWN at the Niels Bohr Institute, University of Copenhagen and DTU Space at the National Space Institute, Technical University of Denmark are proud to share that faculty member Kate Whitaker was awarded the Alfred P. Sloan Foundation Fellowship. She is an Associated Professor at the University of Connecticut and works closely with the DAWN Center in understanding why some galaxies “die” very early in the history of the Universe. 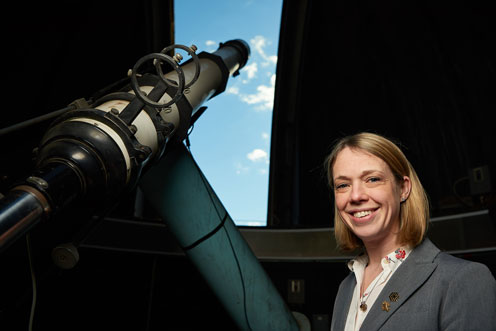 Kate Whitaker, assistant professor of physics, stands next to a telescope inside the observatory on top of the Gant Complex on Feb. 14, 2019. (Peter Morenus/UConn Photo)

As an assistant professor of astrophysics, Kate Whitaker spends a lot of her time thinking about stars. Hundreds of billions of stars that comprise galaxies, to be more precise. But with a recent fellowship from the Alfred P. Sloan Foundation, it is Whitaker’s star that is shining brightly.

Whitaker is one of 126 outstanding U.S. and Canadian researchers selected by the Alfred P. Sloan Foundation to receive 2019 Sloan Research Fellowships. The fellowships, awarded yearly since 1955, honor early-career scholars whose achievements mark them as among the most promising researchers in their fields.

Valued not only for their prestige, Sloan Research Fellowships are a highly flexible source of research support. Funds may be spent in any way a Fellow deems will best advance his or her work.

“Sloan Research Fellows are the best young scientists working today,” says Adam F. Falk, president of the Alfred P. Sloan Foundation. “Sloan Fellows stand out for their creativity, for their hard work, for the importance of the issues they tackle, and the energy and innovation with which they tackle them. To be a Sloan Fellow is to be in the vanguard of twenty-first century science.”

According to colleagues, Whitaker certainly fits the bill as one of the brightest young minds at UConn and beyond.

“Kate’s record so far is truly impressive and speaks to her potential as a leader in her field,” explains Barry Wells, head of UConn’s Department of Physics. “It was my great pleasure to nominate her for a Sloan Foundation Research Fellowship, and I am thrilled they felt she was worthy of the prize.”

An observational extragalactic astronomer, Whitaker’s research tries to reveal how galaxies are evolving from the earliest times to the present day.

In addition to her position at UConn, Whitaker is also an associate faculty at the new Cosmic Dawn Center in Copenhagen, Denmark. Whitaker and her students actively collaborate with DAWN, working towards pushing our detection of quiescent “red and dead” galaxies even earlier in time.

She will be among the world’s first scientists to explore the universe using the new James Webb Space Telescope when it is launched in 2019, which she says will allow her to push into new frontiers of research.

Apart from that exciting work, Whitaker and colleagues Cara Battersby and Jonathan Trump were tasked with building a full-fledged astronomy program from scratch at UConn. Not only has their work exceeded expectations, the fruits of their labor are already beginning to emerge. Whitaker and colleagues have so far created five new astrophysics courses with two more slated for next year, established an official astronomy minor, and are operating a thriving research program that involves doctoral students, undergrads, and even local high school students.

“I am both thrilled at this opportunity and humbled to be named amongst such a prestigious cohort of scientists,” says Whitaker. “With the Sloan Foundation’s generous support, I aspire to continue to lead ground-breaking studies of the distant universe, the mystery of which will no doubt captivate our imaginations.”

The Alfred P. Sloan Foundation is a philanthropic, not-for-profit grant making institution based in New York City. Established in 1934 by Alfred Pritchard Sloan Jr., then-President and Chief Executive Officer of the General Motors Corporation, the Foundation makes grants in support of original research and education in science, technology, engineering, mathematics, and economics.